As George Orwell wrote in 1984, “Who controls the past controls the future. Who controls the present controls the past.” For this reason, archivists play an essential role in preserving the memory and legacy of people, places, and things. Archivists are only one part of the equation. We need the help of scholars, historians, genealogists, and curators to guide our decisions on what materials should be preserved for posterity.

But what happens when records are not preserved? Moreover, who gets to be remembered and who is forgotten?

Using PAFA’s archives, I have been assisting the descendant of Susan H. Bradley (1851-1929) conduct genealogical research. Together, our work attempts to raise awareness of Bradley’s influence on the Philadelphia and Boston art scene during the late 19th and early 20th centuries.

Please read more about Bradley on the National Museum of Women in the Arts blog: Susan H. Bradley: A Rediscovered Powerhouse

The Archives is happy to announce that staff have recently completed organizing and uploading two new digital collections.

More information about PAFA’s Alumni Gallery and Annual Student Exhibition can be found in the online resources section (School History).

We would like to share a video made by John Thorton (PAFA Alum) that documents the Fellowship of the Pennsylvania Academy of the Fine Arts (FPAFA) 2020 show! PAFA Alumna Njideka Akunyili Crosby was announced as one of the winners of the prestigious 2017 MacArthur Fellowship, otherwise known as the “Genius Grant.” In honor of the award, PAFA has hung her monumental two panel work, I Always Face You, Even When it Seems Otherwise. Now on View in the Samuel M.V. Hamilton Building at PAFA. It took extra hands to hang such a large work. Our Team consisted of Liz McDermott, Michael Gibbons, Mark Knobelsdorf, and myself.

The MacArthur fellowships are awarded annually by the John D. and Catherine T. MacArthur Foundation to extraordinarily creative people who inspire the masses.

The Dorothy and Kenneth Woodcock Archives is excited to announce the recent acquisition of George Harding Sr. papers. Harding (1882-1959), a former PAFA student and faculty member for nearly 40 years was a prominent American illustrator. 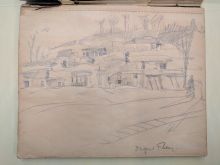 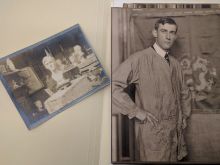 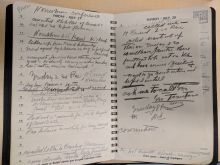 The Dorothy and Kenneth Woodcock Archives is excited to announce the recent acquisition of the Giuseppe Donato collection. Donato (1881-1965) studied at PAFA from 1897 to 1903. After completing his training at PAFA, he traveled to Paris to study under the great sculptor Auguste Rodin. Returning to America, he had many public art commissions including the west pediment of the1940 Philadelphia Municipal Court and a statue completed in 1946 of Thomas Fitzsimmons, one of the signers of the U.S. Constitution, which stands today in Philadelphia’s Logan Square.

The collection provides comprehensive documentation of Giuseppe Donato’s career as a sculptor from 1897-1965. Black and white photographs make up the bulk of the collection but correspondence and clippings also provide contextual information to Donato’s sculpture projects throughout his career.